I am thrilled to have come in 2nd Place for the 2020 Baen Fantasy Adventure Award with my story The Chilling Account of The Wolf-Bann of Krallenburg!
G. Scott Huggins won the Grand Prize for his story Humanslayer, and Morgan Welch came in 3rd Place with his story Seidh. Congratulations to both! You can listen to them talk about their stories in the link above. Both stories sounded really cool, so I can't wait to read them.
I was able to speak a little about my story as well, but that moment went by so quickly that I wanted to add some more thoughts. I'd like to thank everyone at Baen Books for running the contest, especially Jim Minz, Christopher Ruocchio, and Toni Weisskopf for organizing the Virtual Roadshow.
I also want to thank everyone who has read my work over the years, especially Mom (from the beginning!) my brother Chris, M. R. Oehler for introducing me to National Novel Writing Month, several former writing groups (Special thanks to Kyle, Adam and Jacob!) as well as my current writing group. Thanks Gloria, Jon, Kirk, and Richard!
Posted by Joe T. at 6:15 PM 1 comment:

This Sunday, Baen Publishing will be holding its August Virtual Traveling Road Show, where they will announce the winners of the Baen Fantasy Adventure Award. As you might have known, my short story, The Chilling Account of the Wolf-Bann of Krallenburg, is one of ten finalists!

If you have nothing better to do, you can join me (virtually) for the big reveal of the 3rd place, 2nd place, and grand prize winners!
Posted by Joe T. at 12:54 PM 2 comments:

I know, know, it has been forever since I've given this blog any love. I really will have another real post soon, I promise.

But until then, some good news! my short story The Chilling Account of The Wolf-Bann of Krallenburg is a finalist for the Baen Fantasy Adventure Award.

The Wolf-Bann of Krallenburg is a fantasy horror story set in a remote Seventeenth Century German village. It follows a guilt-ridden Jesuit witch hunter tasked with solving increasing werewolf attacks on the town all while dealing with the growing climate of suspicion and hysteria.

From the press release:

"Started in 2014, this is the seventh annual Baen Fantasy Adventure Award. This award honors stories that best exemplify the spirit of adventure, imagination, and great storytelling in a work of short fiction containing an element of the fantastic, whether epic fantasy, heroic fantasy, sword and sorcery, contemporary fantasy, or historical fantasy. The stories are judged anonymously.

The Grand Prize and Second and Third Place Winners will come from among these ten finalists. Due to the cancellation of NASFIC 2020 convention and the ongoing uncertainty caused by the COVID-19 virus, Baen will be announcing our Top Three winners at the beginning of the Baen Virtual Roadshow in early August, broadcast live on Baen’s Facebook page.

Author of the Grand Prize story receives an award trophy, a prize box filled with Baen merchandise, and paid professional rates for first publication rights. The winning story will be featured on Baen.com main webpage from August 15th through September 15th, 2020, and will be available in the Baen Free Library thereafter."
Posted by Joe T. at 9:42 AM 2 comments:

In this supernatural thriller by P.A. Piatt, Alexandru Statornik is a criminal defense attorney who has recently been brought into "The Marchioly Project," a century-old murder case that he is tasked with investigating. The thing is, the U.S. government is still holding the prisoner - a powerful vampire named Cezar Vena. The government has a problem: they may not have exactly afforded Vena all his civil rights in his capture and detention, and they are concerned he might actually win an appeal.

Alex is tasked with poking holes in the case against Vena, so that the prosecution is prepared for anything that Vena's attorneys might throw at them. As he digs further, he uncovers a nationwide cabal of vampires preying on sex workers, the homeless, and anyone on the margins of society. At each step towards learning more about the vampires’ atrocities, he also learns how to fight them. By the end of the book, Alexandru becomes a veritable vampire hunter ready to match the most dangerous creatures of the night.

This novel is very fast paced. In his investigation, Alex races across the country facing threat after threat with little time to catch a breath. It is also full of gore – there are no sparkling romantic vampires in this story, and no one is safe. My main criticism is that so many characters are murdered in this story that at some point it becomes difficult to get attached to any of them, but that only reflects the main character’s own experience. Even then, Piatt manages to break through Alex’s (and the reader’s) calloused heart towards the end of the novel.

Being the constitutional law nerd that I am, I absolutely loved this premise. I would have enjoyed a little more courtroom drama, but that is not this book. Make no mistake, Alex is not merely a paper pusher: he is there to hunt and kill vampires anywhere and everywhere he finds them.

If you like extremely fast paced thrillers and can stomach a lot of violence, blood, and gore, this novel is for you. 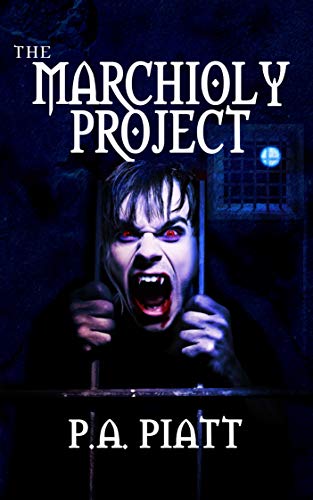